THORNTON is on State Highway 14 nineteen miles southwest of Mexia in southwestern Limestone County. Settlement at the site began in 1868. The Houston and Texas Central Railway ran a line from Hearne to Groesbeck through the area in 1870, and Cain Hogan settled on Steele Creek just west of the present townsite. The community became a stop on the railroad and was named for John E. Thornton, another early settler.

The Thornton Chamber of Commerce conducts an annual $10,000.00 Giveaway and awards 3 scholarships each July. 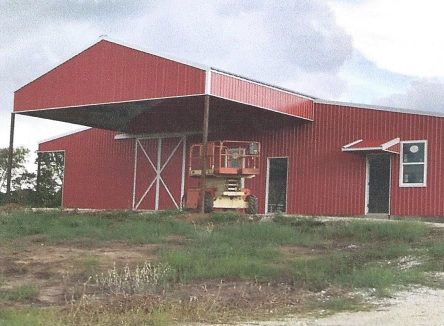 Cross Creek Meadows Equine Therapy and Retreat Center is located at 629 LCR 741 east of Thornton. When construction is completed, the 501 (c) (3) non-profit facility will provide physical and emotional benefits for a wide variety of participants in need of the healing therapy provided by interaction with horses. Children with disabilities and veterans affected by the ravages of war respond to “hippotherapy” provided by the horse’s movements during riding. Grooming and caring for the horse provide an emotional healing.

The Mary Helen Nance Community Center was built in 2017 as a result of donations from Bailey and Mary Helen Campbell in honor of the Nance Family Heritage that is rooted deep in Limestone County. Mary Helen Campbell graduated from the Thornton School in 1938 which stood on this location from 1921 to 2015.